The night before the second day of the tour was so relaxing. Surprisingly, the tiredness and feverish soul that enveloped me was just mended with a hot bath and an hour of rest. Well, thanks to amenities and view of greens outside MCC Hotel (Tubod).

I woke 3am on the second day. But it is not just on that very hour. In all honesty, I woke up 12 midnight (OH MY GOD!), 2am, then 3am. I even dreamed that I was kidnapped in the middle of the jungle. Goodness! Perhaps, it is because of the tough social worker life story given to me by my room mate, Ma’am Mitzie. Hahahaha. I’m so funny! Actually, the story was not a kidnap-thing. It is about climbing mountains, talking to people in all walks of life, including who have different culture. I just accidentally inserted a very mean twist on the plot. LOL!

We left 7am on that morning and left for Karkum, Sapad, Lanao del Norte. Barangay Karkum is an almost two-hour hike from a certain place, Sagurungan.

Karkum is situated as part of a mountain. What we have done on our way there is not just merely hiking but trekking, climbing and even crossing waters.

I interviewed the folks right away once we got there. It is just so amazing and inspiring how they completed their projects despite collecting materials from distant places, not to mention the tough walk the residents have to make.

I took pictures while we are on our way. Please forgive the resolution of some because it’s just my phone that I held while walking. DSLR is just a pain in the neck in that time.

Pink sunrise over a ricefield. 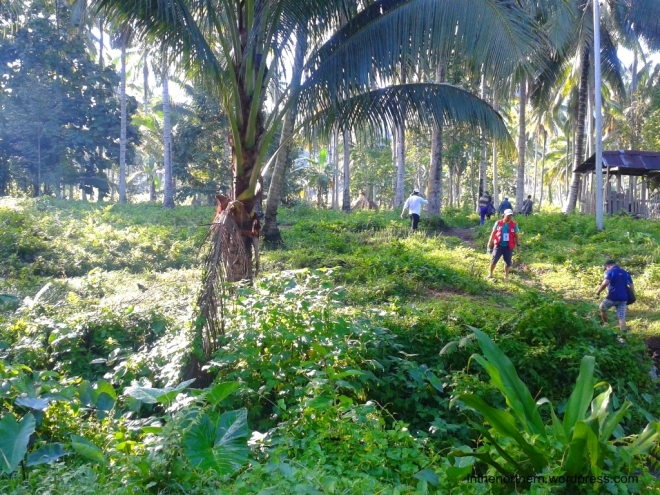 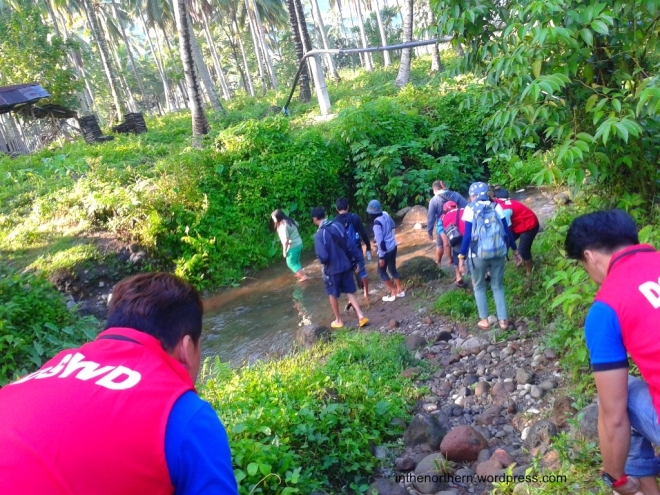 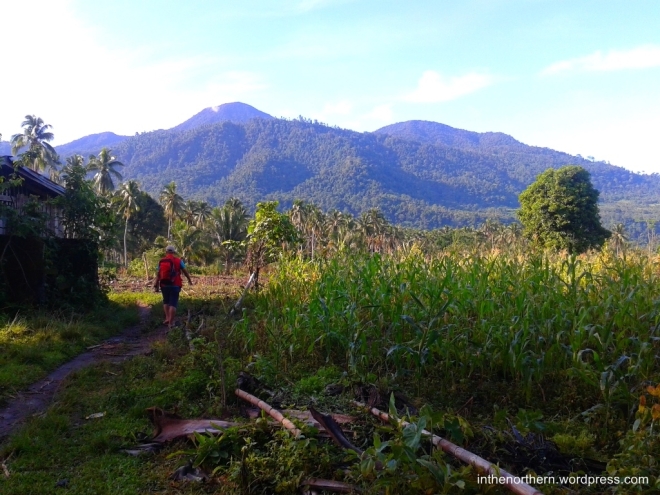 The amazing view of the Sapad mountains. We trekked up to its half.

There were about 20 Program Development Officers (PDOs) were with us during the tour. Thanks for being so accommodating! 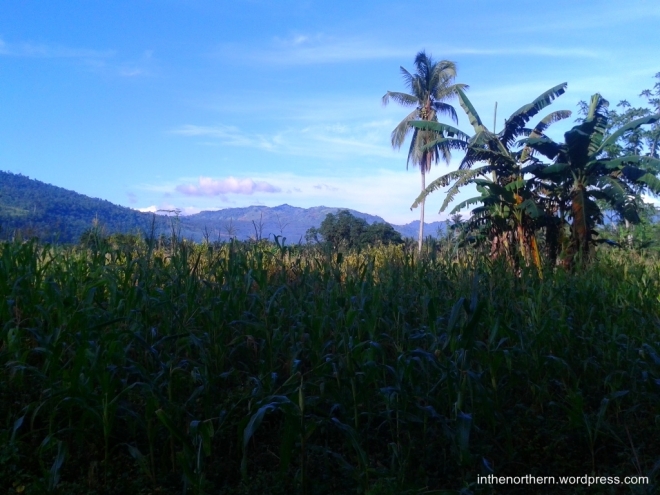 Corn, coconut and rice are the main produce of this part of Norte.

Riding horses is the fastest way in transporting goods from Karkum to the poblacion of Sapad. Horses are heroes that actually serve as their public vehicle. Each sack of corn being transported is cost P 30.00. Obviously, kids like him (in the photo) are trained to ride one, in such young age. If you just saw my reaction moment before I took that photo, when I saw two boys of 4-5 in age riding a horse going to the well to wash their pony. My heart just melt! (And I realized, I don’t even know how to ride a horse. Ugggh! I’ll try horseback-riding some time in the future.) 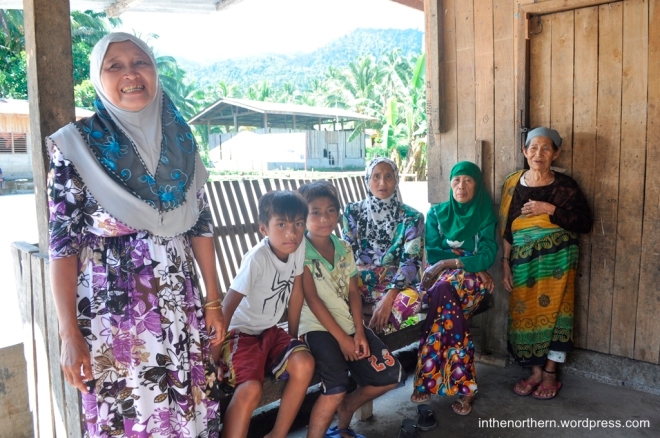 We were greeted by these hospitable group of Maranaos.

These are the projects of SLP-PAMANA in Barangay Karkum. For 1st cycle, it is Open Warehouse with Stationary Corn Mill and for 2nd cycle, they went for Multi-purpose Drying Pavement. Each barangay, by the way, were given P 300,000.00 project fund and another P 50,000.00 incentive at the end of three cycles (three years).

I asked for a photo op with GMA-7 Reporter/Cameraman for Northern Mindanao, Mr. Michael Tolang, and Air Force of the Philippines – 1st Infantry Batallion, who came as our escorts. 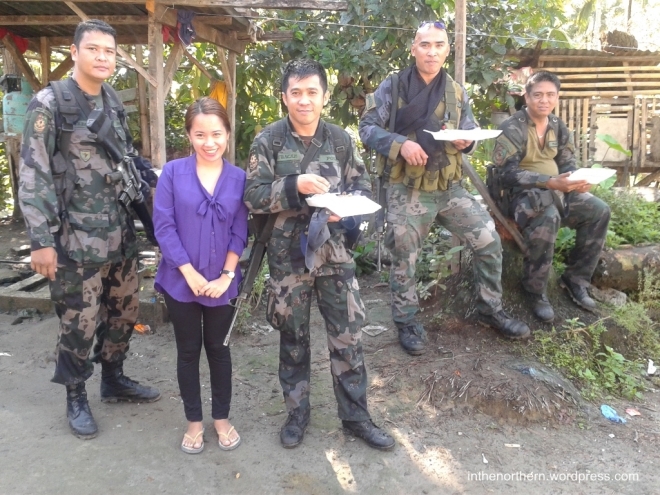 Yeah, I wore slippers. We were asked to wear a pair though.

DSWD’s Sir Oliver and Ma’am Mitz teased me of that “rainbow” outfit. Before that day, a media colleague told me, “Gahimuon man nimu ug fashion show ang field ui!” It seems like I brought wrong set of clothes. Huhuhahaha!

Our walk going back to the plains took an estimated time of 45 minutes. 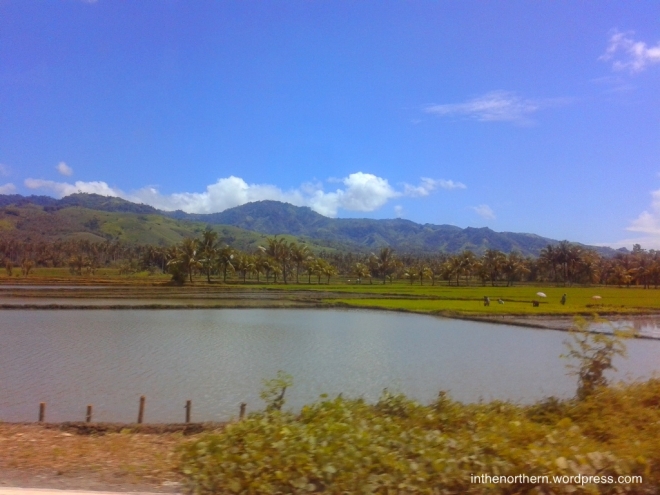 I almost jump in relief after seeing in my itinerary (that I forgot in the van, by the way) that we do not have a project site visit after that one in Karkum. We were so tired that we stayed silent during fruit-eating time, then lunch time. Yes, people in there are used to eat fruits before eating a large bunch of meal to normalize digestion. That’s a thought I learned from them trip colleagues! 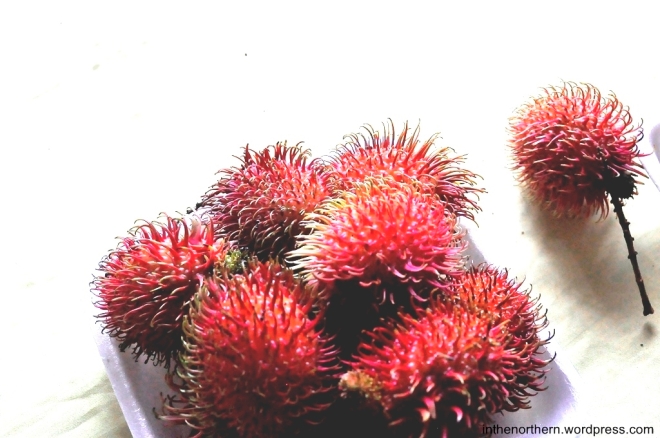 The refreshing view of MCC Hotel pool that has been my favorite.

Next post is about the third and last day of SLP-PAMANA coverage/projects documentation that took place at Munai, Lanao del Norte. Thanks DSWD -10 for the invite! Thanks as well to our news company, BusinessWeek Mindanao Corp., for allowing and letting me have this travel opportunity. I learned gazillions!

Irene is just another blogger who finds beauty in the ordinary, and she believe life should be lived limitless. More —

Talking about other things

Full vlog of our Hong Kong Disneyland adventure via Youtube.

It's Okay to Not Be Okay on Netflix

SOME WORKS PUBLISHED ON

A proud part of

This blog is purely ideas of the author and all borrowed photos and statements are clearly credited. Further, ALL RIGHTS ARE RESERVED.

Please do not steal the content, use it without permission or make profit out of it.